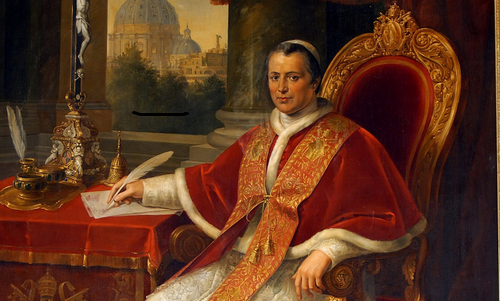 Prince of the Church: Pius IX, who was pope from 1846 to 1878, was an outspoken critic of Enlightenment ideals. Image Credit: Wikimedia Commons
Share Share

From the beginning, U.S. Catholics have largely embraced the American experiment of ordered liberty based on the principles of classical liberalism such as the rule of law, religious freedom and ideological pluralism. But more recently, as the U.S. has experienced illiberal movements on both the left and the right, some Catholic thinkers are embracing integralism as the orthodox Catholic approach to politics. This ideology is growing, vibrant and influential, but it is inherently illiberal and dangerous to American democracy.

Integralism, like Catholic teaching in general, holds that the church and state are distinct and autonomous within their own spheres because they have different ends, supernatural and natural, eternal life and the common good (i.e., virtuous human flourishing, peace). Integralism differs from Catholic doctrine in the post-Vatican II era, however, by insisting that it is essential Catholic teaching that the church and state should not be separated. Rather, integralism holds that, since natural good is ordered to supernatural good and the common good to eternal life, the state should recognize the Catholic Church as the sole legitimate spiritual authority. Further, the state, through its subordination to the Church, should act as its arm in the temporal sphere to promote and establish the Catholic vision of the common good and submit to the authority of the Church in areas where the spiritual and the temporal overlap.

The leading website for integralist thought, The Josias, defines Catholic integralism as a

tradition of thought that, rejecting the liberal separation of politics from concern with the end of human life, holds that political rule must order man to his final goal. Since, however, man has both a temporal and an eternal end, integralism holds that there are two powers that rule him: a temporal power and a spiritual power. And since man’s temporal end is subordinated to his eternal end, the temporal power must be subordinated to the spiritual power.

This logic leads some integralists to a totalitarian vision that justifies such things as the disenfranchisement of women, Jews, atheists and indeed all non-Catholics; the persecution of heretics and sexual minorities; the kidnapping of secretly baptized children; and the abolition of religious toleration even for other Christians. But this vision is a distortion of the Gospel, drawing conclusions that misrepresent the Catholic tradition by forgetting that Jesus’ “kingdom is not of this world” (John 18:36), that he refused the devil’s temptation of seizing worldly authority (Matthew 4:8) and that the “one thing necessary” (Luke 10:42) is to sit at the feet of Jesus to learn his ways.

The History of Integralism

As fantastical as integralism’s illiberal vision might seem today, it is important to remember that some version of this was the modus operandi for approximately 1,400 years throughout the West, in both Catholic and Protestant spheres. From the privileging of the Church by Constantine in A.D. 313 to the rise of liberal theory and subsequent revolutions beginning in the 18th century, the Catholic Church has played a central role in the development of Western political thought and practice, either directly through its teachings or indirectly through generating opposition. In response to the dissolution of Christendom, the popes of the 18th, 19th and even early 20th centuries reiterated the political theology of the Middle Ages and condemned liberalism, along with—perhaps especially because of—its attendant anti-clericalism and often anti-Catholicism. The term “integralism” applies to those theories that resisted the massive political shift toward liberalism.

In the second half of the 20th century, the Catholic Church began to change its thinking and eventually reform its teaching. This happened for at least three reasons. First, the post-World War II liberal regimes largely ceased to be explicitly anti-clerical. Second, a theological movement of going back to the sources of the early, pre-medieval Church helped it retrieve some forgotten truths and methods of evangelization and engagement with the world before Christendom. Third, the Church developed a growing appreciation of fundamental human rights rooted in the dignity of the human person and the natural law, including religious freedom and freedom from coercion in matters of conscience. The latter was formally enshrined in the Second Vatican Council’s declaration on religious freedom, “Dignitatis Humanae.” The Church regained the sense that it is essentially a mission, an evangelical endeavor that exists to propose, not impose (as St. John Paul II often expressed it), and the Church’s teaching was reformed.

Why Integralism Is Gaining Ground Today

So why the revival of integralism today, and why is it important, given that even its adherents see zero chance of their vision coming to fruition? Over the past generation or so, the leading movement within conservative American Catholicism has been so-called “Catholic fusionism” or “Catholic neoconservatism,” most often associated with the journal First Things. This movement formed a core part of the Reagan coalition and Republican electoral victories in the 1980s and ’90s. According to Park MacDougald’s article in City Journal, the movement

sought to develop a model of a distinctly American conservative Catholicism, one that blended traditional Catholic teaching on social issues with free-market economics and a commitment to individual rights.

One could also add to this description a hawkish foreign policy intent on exporting its version of liberal democracy and a whiggish narrative about the “new evangelization” and a coming “new springtime” for the faith. The movement reached the height of its influence in the later years of St. John Paul II’s pontificate, the pontificate of Benedict XVI and the presidency of George W. Bush.

But under the weight of the Iraq war debacle, a two-decades-long sex abuse scandal, the breakup of the Reagan coalition and upending of the Republican Party by Trump, the fusionism movement and its narrative are in tatters among some conservative Catholics. Feeling betrayed by a Republican Party that paid only lip service to its concerns, doubtful of the compatibility of economic liberalism with Catholic social teaching and defeated by a sexually libertarian cultural agenda, serious Catholics and social conservatives are more politically homeless than ever before and are looking for an alternative vision. They shrink from today’s dechristianized liberalism with no agreed-upon common good and reject aggressive wokeism.

The leading integralists are not fringe figures: Adrian Vermeule, a respected Harvard constitutional scholar; Gladden Pappin, a political scientist at the University of Dallas and editor at American Affairs; Alan Fimister, a moral theologian forming future priests at one of the largest seminaries in the U.S.; Edmund Waldstein, the polylingual monk and the son of an exceptional and famous theologian; Thomas Pink, a philosopher at the University of London. And those who are more or less sympathetic with the integralists are even less fringe: Scott Hahn, one of the most brilliant and effective Catholic evangelists in generations; R.R. Reno, the current editor of First Things; D.C. Schindler at the John Paul II Institute for Marriage and the Family; and Sohrab Ahmari, the op-ed editor of the New York Post.

These intellectuals and their arguments, even with no chance of practical implementation, are convincing primarily young, serious Catholics—hitherto part of and future leaders within a right-leaning classically liberal movement—that Catholic social teaching and classical liberalism are incompatible, that the Church teaches integralism on a dogmatic level such that orthodox Catholics must hold it, that the free market is necessarily rapacious and vicious, and that having failed to evangelize for two generations, Catholics should now impose their faith and its implications from the top down on Catholics and non-Catholics alike.

Some thinkers have convincingly written against integralism, including James Patterson, Michael Hanby, Timothy Troutner, Robert Miller, Robert George and Ryan Anderson, among others. Kevin Vallier is working on a book for Oxford University Press. But despite their efforts, many young Catholics are turning to integralism as a reasonable alternative to contemporary American secular culture.

How to Argue Against Integralism

When arguing against integralism, it is important that the arguments come from within the Catholic intellectual tradition rather than exclusively from the classical liberal perspective, since integralists reject the latter. To that end, here are four lines of argumentation that may actually persuade those tempted by integralism to reconsider their sympathy.

First, while others have pointed out the limited authority and overreach of magisterial Catholic social teaching, I would like to go further. Other than its basic principles (e.g., the common good as the purpose of temporal governance, the innate dignity of the person, the principles of subsidiarity and solidarity, or the need to care for the poor) and the negative moral norms derived from them, the vast majority of what is presented as Catholic social “doctrine” is necessarily contingent. It often consists of papal reactions to the issues of the day and prudential judgments rather than matters of faith. This so-called doctrine includes Pope Leo XIII’s views on the union of church and state in “Immortale Dei” and other papal documents condemning the anti-clerical and anti-Catholic liberal regimes of the 19th century as “liberalism” tout court. While Catholics cannot ignore such teaching, they need not accept it as if it were part of divine revelation or necessarily deduced from it.

Second, the desire to re-create a new Christendom is nostalgic and a failure of imagination. Christendom was not a necessary outgrowth, a requirement, of evangelizing the world for Christ; another path could have been taken, possibly one with a better outcome. Christendom was ultimately a political failure that led to a 300-year revolt and hatred for what is perceived as Christianity. In the end, Christendom as a mode of political life was not necessarily good for the spread of the Gospel. Why, then, would we want to do it all over again, given what has been learned?

Third, liberalism, like the free market, is a mirror of our souls. While not quite neutral, because human beings are not, the practice of liberalism reflects our subjectivity. If the participants in the market are virtuous, the market will tend to the be virtuous. If we are vicious, it will be vicious. If the participants in the liberal society are Christian, the liberal society will be Christianized. The current crisis of liberalism in the United States is not written into the DNA of liberalism. It is a failure of the Church to carry out its mission of evangelization.

And fourth, for the Christian, God created us free, but mankind abused that freedom through sin. God redeemed mankind and wants a free response of love to heal our freedom. Freedom is part of our dignity and nature and essential for salvation: “It is only through the sincere gift of self that man truly finds himself” (“Gaudium et Spes” 22). In seeking to force a Catholic society into being, integralism directly opposes this freedom and thus contradicts Catholic teaching.