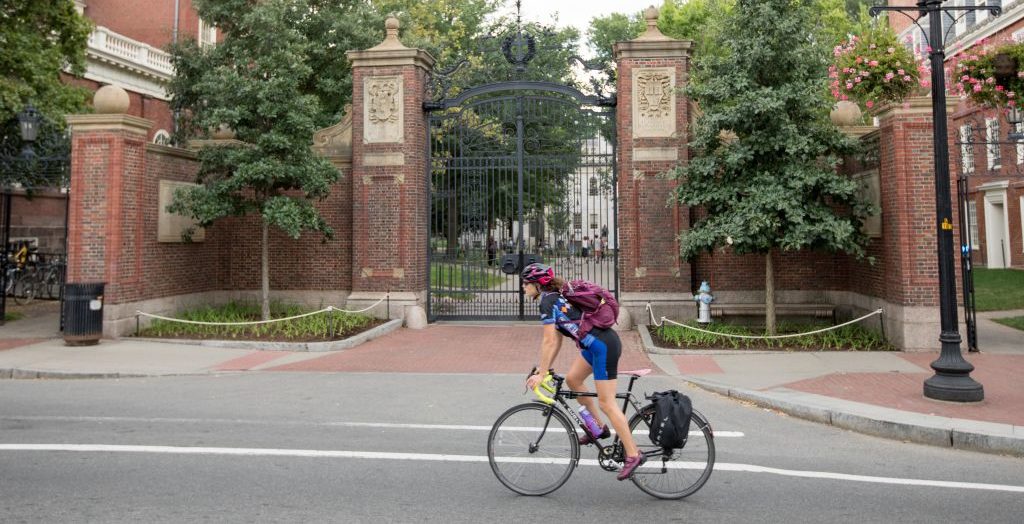 After I arrived at Harvard University in 2018 to begin my freshman year, I was beckoned into a great theater and welcomed as a member of the elite: “Look around at your fellow class members. Look at the future politicians, athletes, artists and activists. These are the people who are going to help you shape the world’s future. These are the gifted students who are joining you on this transformational journey.”

Elite, indeed. In 1960, Harvard College received around 5,000 applications and accepted roughly 30%. For this year’s freshman class, 57,435 applications poured in and the school accepted only 3.43%. The narrower the funnel, the finer that kids grind themselves down to squeeze through it. The ones who succeed feel like they’ve earned their place at the top of the ladder—and need to do all they can to keep it.

So it’s no surprise that most of the kids sitting around me were feeling a heavy burden of imposter syndrome. After all, most of what made us “gifted” was merely that we were the children of doctors, lawyers, bankers and academics who had guided us toward elite schools since our earliest days of childhood.

But I didn’t feel like an imposter. I thought the ego-stroking was a piece of theater. My friends at home in London who were going to Cambridge University told me about their first week. It consisted of no such welcome: They’d been granted five days of drunken debauchery, followed by an essay prompt, a 12-book reading list and a set of deadlines.

Cambridge had rejected me, but then Harvard had accepted me. As I saw it, I’d gotten unlucky and then I’d gotten lucky. The acceptance letter hadn’t suddenly transformed me into a world leader, and I didn’t think that Harvard was going to magically turn me into one. The school had given me an opportunity because I had decent grades, was good at writing applications, and happened to fit a profile—brown British humanities student who likes acting, dancing and drawing—that the admissions office needed to fill.

These kinds of pompous promises of grandeur are widespread at elite American universities, and I, like many people, react badly to them. Why do I react this way? I think it’s because I believe that Harvard’s promise to turn its freshmen into inspiring elites is largely unfulfilled and that it’s an awful mistake to make that promise in the first place.

Almost everyone—even Harvard professors—is in some level of agreement with my first point: Harvard vaguely gestures toward greatness but doesn’t truly encourage it. The college admits a bunch of kids with magnificent dreams and spends four years nudging them toward accumulating gold stars. It doesn’t transform its students into inventors or artists or leaders, helping them turn their dreams into reality. It turns out people who are very good at high-paying roles in the corporate economy—consultant, banker, software engineer. To the extent that Harvard transforms its students, it transforms them into sheep-like, credential-obsessed robots.

This may be strongly stated, but research backs this up. Studies show that graduating from an elite college usually doesn’t lead to higher career earnings or enhanced well-being, that the person you are before entering college “is a better predictor of your future success than the school you graduate from at 22.”

What’s far less common is for anyone inside the university to suggest that Harvard students shouldn’t be taught that they’re special. Even most critics of elite universities assume that these institutions, like any heavy-handed government, should intervene. They argue that top schools shouldn’t leave their young charges vulnerable to the recruiting tactics of Wall Street, Silicon Valley and the rest of the Fortune 500. Instead, they should set out a cohesive vision of greatness for students to aim toward and provide the proper guidance for them to get there.

This is an assumption worth questioning, largely because it’s difficult to even imagine how we could create that kind of environment. As much as the narrative about grooming world leaders and change-makers dominates the websites of elite universities, it is hardly the only, or most important, purpose of such a school. For an incoming freshman, an Ivy League education is supposed to be many things: a signal of your intelligence, a path to social mobility, an opportunity for a cultural inheritance, a place to find yourself and a place to find your friends. It is, in other words, a bundled product with a jumbled set of functions, and each of those functions will matter more to some kids than others.

This difference in preferences is seen in all aspects of student life. In a typical class at Harvard, or any college, some students are there to satisfy a requirement, some are there because of a genuine interest in the subject, some plan to do further work in the field, some are just looking to get an A. Since students are there for different reasons, it’s impossible for them to get an individually tailored experience. The professors must teach everyone the same way.

The one thing within the professors’ power—indeed, what I would hope they would do—is to ensure that the classroom is a place of lively debate and free inquiry. They can lay down the law on the first day of class: “By all means, bring your politics or identity into the classroom, but you are not allowed to use it to shut someone else up. Every idea is on the table. Political passions or career aspirations can’t get in the way of that.”

This is the kind of classroom experience we should want for students, but fewer and fewer professors provide it. That’s a problem not only at Harvard but at most universities. And the same point applies more broadly: Rather than asking what kind of elite we want to engineer, we should ask, what are the experiences that we want every student at an elite university to have?

Harvard’s focus on the virtues of its students is not only a distraction but also could be damaging. The only experience that is unique to Harvard freshmen is that they attend college with other Harvard freshmen, and that experience is immediately distorted when we teach them to relate to each other as fellow elites.

More importantly, this sadly leads to missed opportunities. One of the craziest things about working on my own projects since the COVID restrictions began has been seeing how easy it is to be paid for something if you have the Harvard badge, the courage of your convictions and the humility to ask. It is a luxurious position to be in, but so many students have not taken the time to figure out how to properly use it. We spend most of our time trying to justify our place at an elite university, rather than taking advantage of it.

As I see it, the self-image that was imprinted on my Harvard class when we arrived has helped overwhelm many of my peers with anxiety. This is not only anxiety about their grades, but anxiety about their schedules. They feel a constant need to pack their calendars and resumés—the compulsion to classify themselves as an artist, activist, writer, politician—and then to make every second of their time socially, academically and professionally productive.

So, you learn to try out an activity or an idea only if you already believe you’re the best at it, and that’s an extremely high bar for experimenting. You tend to spend your freshman fall signing up for everything, sophomore year desperately trying to keep up, and junior year realizing there wasn’t much benefit in trying. By the time recruitment season rolls around and blue-chip companies start touting their starting salaries and fancy perks, you haven’t found anything else that you’re convinced you could make enough money doing.

It’s unlikely that the best way for Harvard students to accomplish great things is to start by congratulating themselves for being so smart and then spending four years overloading their schedules. Students need time to reflect on why they are learning what they’re learning and doing what they’re doing, and they need a level of confidence—a confidence that can come only from recognizing one’s limitations—that allows each of them to explore outside the classroom.

Hovering over the Kids

But Harvard is basically a massive helicopter parent—and, worse, it’s the annoying helicopter parent who can’t stop talking about how great the children are. In the end, critics argue, too many Harvard students turn into the wrong kind of elites—excellent managers, not inspiring leaders. That may be true, but the real problem is that the students are taking on the self-image of elite status in the first place. We think that by puffing up students we’re making them confident, but we’re actually just making them all feel like frauds.

Harvard needn’t instruct its students to do visionary, purposeful work or indulge them in the idea that they are better or more talented than anyone else. It should be maniacal in its insistence upon open inquiry, decide on a few specific experiences to make compulsory—an experience of vertigo, perhaps—and, mostly, just let the students get on with their lives.